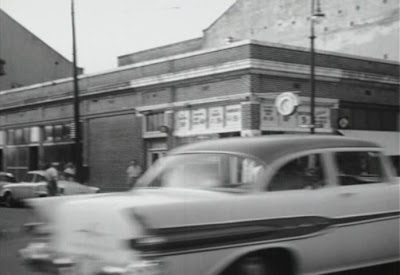 (above: 1957 Pontiac Chieftain Two-Door Sedan passes through the frames of remembrance as a ghost of a lost America, lingering as an echo on the Mother Road)

To the Mother Road of Ghosts

Perhaps it needed to happen. But the loss of Pontiac for the enthusiast community is still raw just beneath the surface, eliciting mixed feelings, just over two years since production ceased --yet another American brand in decline succumbed to the anvil of unsentimental market forces and time's relentless advance. On that fateful day, press releases announcing the end were written simply, with no fanfare or ceremony: "November 2, 2010--General Motors Corporation (NYSE: GM), a United States-based automaker, has officially ended production of the Pontiac brand."

Herein with an acknowledgment of its legend and a wistful nod to an era truly finished, it still seems somewhat unbelievable and hard to accept: Pontiac assembly lines are gone, shuttered, abandoned, are memories in the dark, with the likes of the iconic GTO, Trans Am, Firebird, LeMans, Catalina and Bonneville slated not to carry on in any iteration. At least not into the foreseeable future.

Eleventh-hour attempts to reinject relevance into the Pontiac moniker, via the GM Australia/platform-sharing Holden Monaro experiment to revive the GTO (during a very brief American presence from 2004 to 2006) failed to gain the necessary market traction to keep the momentum alive. And despite the impressive result, an American V8-powered 6-speed muscle car (with the LS1 and LS2 series engines from Corvette), the Pontiac “fuel for the soul” apparently did not amount to sales.

The neo-GTO, Soltice, and the follow-up 4-door G8 (another Australian GM platform-sharing muscle car experiment from Holden Commodore) were too little too late. Years of vague and unappealing styling had already metastasized into the inevitable demise awaiting the brand. Pontiac was finished. But what a great run and legacy it has left.

In this multi-part series we will reminisce, recount, and review the decades of driving and styling excitement the Pontiac division of GM gave to the automotive world. From its humble beginnings to its rise to worldwide fame and on to the downward spiral --its fall from grace, Pontiac blazed its own path. And perhaps primarily known today as the harbinger of the 1960s era American muscle car, Pontiac's storied past is more than just ensconced in raw power and testosterone-driven sales. For this we must track back to 1755  and immerse in American Indian lore:

Rise of the Chief (above: hood ornament of the 1951 Pontiac Chieftan Deluxe 4 dr sedan)

Pontiac became chief of the Ottawa Indians in 1755. He soon became the head of the Council of Three Tribes, an intertribal group consisting of the Ottawa, Potawatomi, and Ojibwa people. The French traders and the Indian tribes had coexisted well, trading furs for supplies like food, guns, ammunition, and tobacco. In 1760, the British had just defeated the French and taken over their forts. Sir Jeffrey Amherst, Major Robert Rogers and British/colonial troops occupied Fort Detroit, and the British took possession of other forts around the Great Lakes region. Some of the British, including Amherst, were contemptuous of the Indians, limiting trade and angering the tribes.

In 1762, Pontiac enlisted all of the local tribes to drive out the British. The English called this action "Pontiac's Conspiracy." Pontiac's strategy was to have each of the 18 local Indian tribes attack the fort nearest to them in May 1763, and then to eliminate the British settlements. Pontiac planned to begin the rebellion by taking Fort Detroit.

Pontiac planned to conquer Fort Detroit (what is now Detroit, Michigan) on May 7, 1762, but his plan was betrayed, and the British found out about it. He therefore did not attack as planned. Pontiac did lay siege to Detroit, encircling the fort with warriors, blocking supplies and reinforcements. On July 31, Pontiac won the Battle of Bloody Run, but reinforcements eventually did come to Detroit, and Pontiac retreated. The tribes captured eight of the 12 forts that they attacked, and the settlements were left in ruins.


A White Flag then Betrayal

By 1764 the French no longer supported the Indian efforts and actually sided with the British, and the British re-took many of the areas. Pontiac agreed to a peace treaty in July 1766 at Fort de Chartres, Illinois. He was murdered, clubbed to death, by a Peoria Indian three years later. To avenge Pontiac's death, the Ottawa Indians killed many Peoria Indians. Forged in bloodshed, Pontiac's name and image would thereafter find a new beginning and eventually penetrate modern social consciousness.

In homage to the fallen leader, the city of Pontiac, in southeastern Michigan, was established in 1819. Jumping ahead 71 years, to 1893, Edward M. Murphy established the Pontiac Buggy Company in Pontiac, Michigan producing horse-drawn carriages thru 1906. From this inception the Chief would rise again...

Chad Glass
Chad Glass brings Hollywood visual storytelling to the world of fine art. Commercial storyboarding and drafting has made drawing his primary medium of expression. “Without commitment to the craft the artist is nothing, talent isn’t enough: What discipline I lacked as a child artist has been forced upon myself into adulthood by being among unforgiving situations, where the expectation to perform is perpetual. This is both like a hell and a release and surrender.” Chad Glass is a founding partner in the Anka Gallery.