Driving the 246 Dino on Mulholland Drive 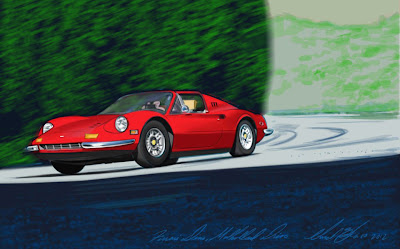 Dino illustration and writing by Chad Glass
Son of Enzo Ferrari, born in 1932, Alfredo "Dino" Ferrari was a young and gifted mechanical engineer, and central to the development of the Dino 1.5 L DOHC V6 engine. Acquiring muscular dystrophy early in life, Dino Ferrari could not; however, continue his work on developing engines. He died at the age of 24 in 1955, but his legacy carries tremendous significance: The Dino, an "un-Ferrari," ironically became one of the most important and famous cars in the Ferrari lineage.


Originally a racing engine platform, in 1966 Ferrari wanted to compete in the 1.6L class of the Formula 2 race series. The Dino engine was the clear choice but it needed a car. Not having the resources to be able to properly meet the 500-unit homologation requirements, Ferrari looked to Fiat to help produce the sports car. What resulted initially was not the Dino of interest here, but, instead, its direct cousin the Fiat Dino. As it was not initially intended to be badged a Ferrari, the Dino line of cars was to be a sub-brand, "budget" marque, built by Ferrari, with its engine as the defining element. The Fiat Dino further underscores the sort of indirect path of inception to the Dino phenomenon: As the son carries the DNA of the father, alas, the son is not the father --so is the Dino.


Acting as an "engine carrier," the Pininfarina-designed, front-engined, Fiat Dino Spider was introduced at the Turin Motor Show in 1966, and a Bertone-designed coupe version was introduced one year later at the Geneva Motorshow. Fiat was, then, first to create a Dino iteration with engine married to road car. And thus the groundwork was laid for the more well known, mid-engined, "Ferrari" Dino of renown. The Ferrari Dino 206 GT, 246 GT & GTS were all equipped with engines identical to those used in the Fiats (2.0L and 2.4L respectively).


Besides being Ferrari's first mid-engined road car, the 206/246 Dino platform was later continued and developed for use in subsequent V6 and V8 power plants, used for decades thereafter up to the F360 (the 360 is technically a Dino). The one pictured above, on Mulholland, is an example of a Euro 1973 Dino, 246 GTS. And the owner, Scott McClure, was so generous as to allow our Elysee Wednesday group to enjoy driving it for the afternoon.


With the initial meeting point at a Starbucks, off Beverly Drive and Mulholland, it became the Ferrari morning: The nearer I drove to the rendezvous, the more Ferraris I began seeing. First was a brilliant red 458 Italia, then a red 275 GTS, then a yellow 275 GTB --all on the road. Arriving exclusively only to drive Scott's Dino, I must not have gotten the memo about a Ferrari enthusiasts meet at the top of the hill. Upon arrival, I took the car sightings as a bonus and found the parking lot to be populated by even more Ferraris. Having brought my camera, I took shots of the proceedings while I waited for the rest of the group to arrive.

After a time with the car in the parking lot, meeting everyone and comparing stories about cars, it was time to face the open road. With the Dino in front, we motored away and found a first location to film and photograph the car in action, with people agreeing to take turns behind the wheel. Once it was my turn to drive, I adjusted the seat and noticed how immediate the controls were at my fingertips. I realized I was in a Ferrari Dino. The steering wheel I was gripping was a Dino steering wheel. The interior was in good condition but tempered with regular use. Besides the analog gauge cluster and steering wheel, the standout feature for me was the gated shifter, a commanding piece of hardware that also happened to be beautiful.
I tested the pedals and their spacing, the weight of the clutch, figured out how to use the seat belt mechanism, and set off east down the winding road. Not wanting to thrash someone else's prized possession, I naively pampered the car onto the roadway. However, Scott quickly informed that the Dino wanted to be revved high before letting out the clutch. It was not to be babied. As I began to immediately see his point, the car hesitated a bit as I was being too gentle. I pushed the clutch back in and throttled higher, let it out, and took off. It was then when I glimpsed the high-strung nature of the engine. It jumped ahead as if it were telling me "Umm... hey, look, I'm a Ferrari and you really need to jam on this."
Coming from racing pedigree, the engine wanted to be revved very high. Otherwise it lacked bottom end torque. As 1st gear was to be left as soon as possible, I went to 2nd and revved it quite high anticipating 3rd. In the power band the engine and exhaust note sounded so fantastic. The ensemble of engine and chassis really came alive. I can say it was one of the best sounds from a car I have yet heard. As I am not accustomed to driving vintage sports cars, I found the experience to be surprisingly and wonderfully mechanical. The small go-kart-like Dino was quite nimble on its near 40-year old suspension. The rawness of the drive required that I pay more attention to the physical input. The more I gave, the more it rewarded.
After about an 1/2 mile I came to a place to turn around. Easing off onto the shoulder, the pavement dropped off. Although slight, the maneuver revealed how rock-hard the suspension was (in this case, an asset). I drove back, up hill, and gave the car more aggressive inputs. Although taken in short jaunts, I drove the car properly, if not briefly, and it responded in kind: The cabin quickly grew hotter with the heat soaking through the firewall and transmission tunnel. I could smell the oil and gasoline and exhaust all thick and interwoven among the intoxicating sounds and wind. The targa top was the way to go in this particular car, a mixture of pure sex and bravado. After a few runs I turned around one last time to rejoin the group.
Had I more seat time in the Dino I could have taken the car to greater extremes of handling, but it wasn't my car and the time was short. Although it wasn't among the more powerful cars I have driven, it handled and sounded exquisite. Of all the Ferraris I have yet piloted the Dino was the most fun, a raw but beautiful driver's car. The group was ecstatic over having had the experiences and joked with Scott about how we were going to keep the car safe for him, letting him borrow it on occasion. What a car indeed.
Posted by Chad Glass at 6:54 PM

Chad Glass
Chad Glass brings Hollywood visual storytelling to the world of fine art. Commercial storyboarding and drafting has made drawing his primary medium of expression. “Without commitment to the craft the artist is nothing, talent isn’t enough: What discipline I lacked as a child artist has been forced upon myself into adulthood by being among unforgiving situations, where the expectation to perform is perpetual. This is both like a hell and a release and surrender.” Chad Glass is a founding partner in the Anka Gallery.